Barbie, the leggy doll that Mattel brought to life in 1959, recently celebrated her 60th birthday, and although she can be a bit controversial, she’s much more than just a pretty face. Nobody accumulates Barbie’s kind of car collection without being smart, successful, and handy with a wrench (albeit a plastic one).

So here’s Hagerty’s list of Barbie’s nine greatest vehicles made by or for Mattel, listed in the order they were produced. 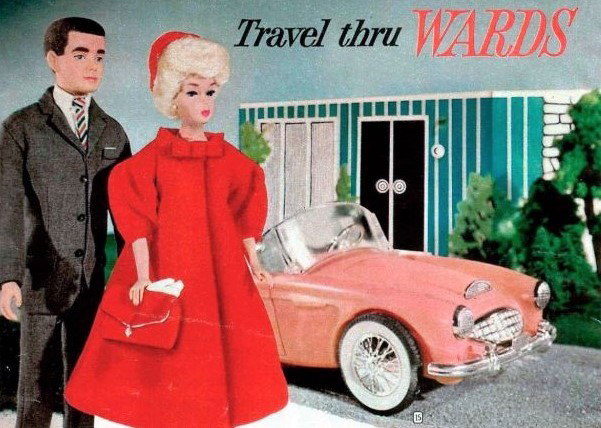 Barbie 1962 Austin-Healey 3000 MkII, Montgomery Wards
There’s nothing like being No. 1. Toy catalogs of the era applauded the car’s “exquisite precision design… all poly body with chrome-like accessories and fittings… clear plastic windshield… and free-rolling exact-replica wheels with steel axles.” The Healey could be had in six color combinations: yellow with blue interior, orange with blue, pink with white, pink with blue, green with cream, and red with white.
While an actual 1962 Austin-Healey 3000 Mk II in #3 (Good) condition on Hagerty Valuation Tools® has an average value of $42,800, the 18-inch 300 MkII in Barbie’s collection will set you back about $250 in excellent condition. Back in the day, you could score one in the Montgomery Ward catalog for less than five bucks, which is equal to about $42 today.
1962 Mercedes-Benz 190SL 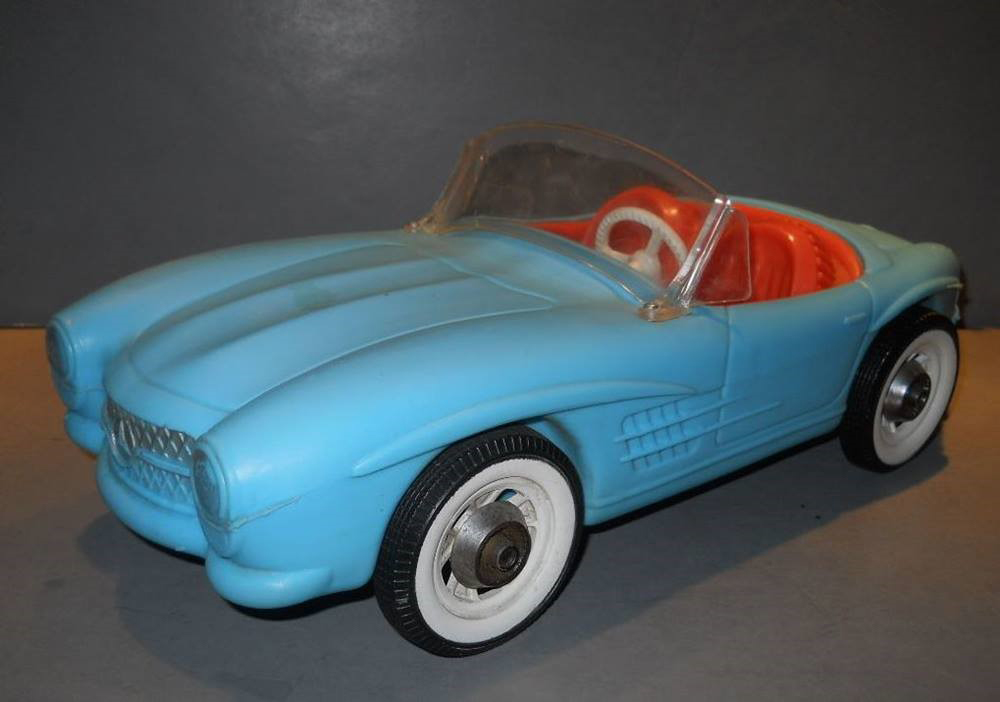 Barbie 1962 Mercedes-Benz 190SL, Barbielistholland.com
The colors aren’t as exquisite as the classic silver-and-tan combo in a real 190SL, but the second car in Barbie’s garage was a step up in terms of luxury (although it also lacked any kind of roof). The primary colors for the German roadster were turquoise and orange, but a few variations exist, including powder blue and orange, turquoise and white, and powder blue and white.
The average value of an actual 1962 Mercedes-Benz 190SL in #3 condition is $92,500, but a Barbie 190SL can be found for $25–$200.
1970 Country Camper 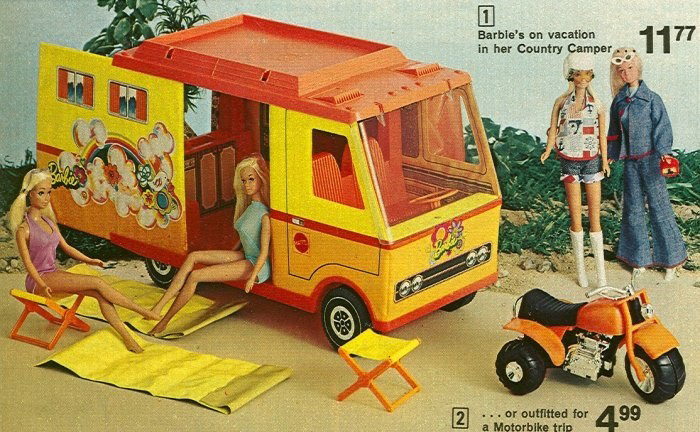 Barbie 1970 Country Camper, Sears
Barbie had a lot of these home-away-from-home vehicles through the years—including a monstrous 3-foot Traveler Camper in the mid-1970s—but the Country Camper was the boss. It even had its own theme song (set to country music, naturally):
Singer: “Take Malibu Barbie and her suntan friends with their glasses and their towels… Where the road never ends in Barbie’s new Country Camper.”

Announcer: “Look what you get: a picnic setup, a pop-out tent, sleeping bags, a camper kitchen…"

Barbie 1976 Star Vette, Mattel
The first of many in Barbie’s Corvette fleet was this purple/pink convertible with white interior. The red European version is much cooler, but purple is what we got in the U.S.
A 1976 Chevrolet Corvette has an average value of $7800 in #3 condition ($22,200 in #1 Concours condition), but there’s a huge difference of opinion about what a plastic Star Vette is worth. Prices for Barbie cars in similar condition range from $15 to an astounding $565 on eBay.
1987 Ferrari 328 GTS

Barbie 1987 Ferrari 328 GTS, Mattel
The “red-hot Barbie Ferrari”—yes, TV commercials used those exact words—was the best, although a white version arrived later. In a commercial that featured a red Prancing Horse, Barbie literally turns Ken’s head when she drives past. Oh sure, she ultimately stops and gives him a lift, but she isn’t about to turn over the keys. Ken rides shotgun.
A 1987 Ferrari 328 GTS in #3 condition has an average value of $51,900. The plastic version can be had for $25–$50.
1988–89 ’57 Chevy Bel Air 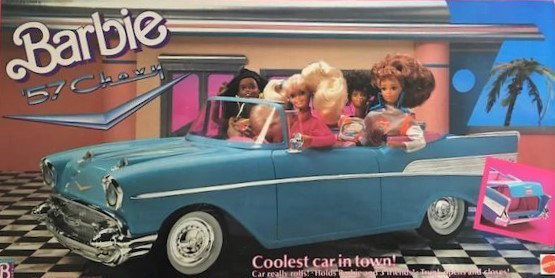 Barbie 1957 Chevrolet Bel Air, Mattel
Barbie finally scored a classic car in 1988, when Mattel afforded her a ’57 Chevy—in convertible form, of course. Available in pink or turquoise, the Chevy features impressive wheel and chrome detail, as well as seat belts. Seat belts? Certainly not in a ’57 Chevy. It’s all about the kids, right?
One in excellent condition will cost you $80–$125, which is pretty stiff for a 30-year-old piece of plastic but much cheaper than what it’ll cost you for the real thing: $47,100 for a ’57 Chevy convertible in #3 condition. Of all the Barbie cars, this might be the best one to display on a shelf.
1991 Porsche 911 Carrera Cabriolet

Barbie 1991 Porsche 911 Carrera Cabriolet, Mattel
Four years after getting her first Ferrari, Barbie welcomed her first Porsche. Available in white with hot pink interior or, well, white with hot pink interior, the German sports car has working headlights, so Barbie can see clearly on late-night runs to Taco Bell.
A 1991 Porsche 911 Carrera 2—also with working headlights—will cost you about $31,000 in #3 condition. You can get the corresponding Barbie car for $25–$75.
2004 Cali Girl Chevrolet SSR 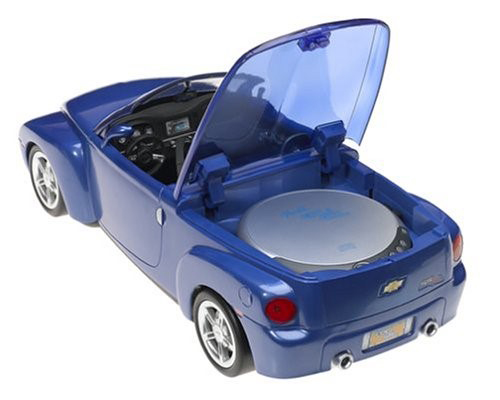 2004 Cali Girl Chevrolet SSR, Amazon
In 2004, Barbie jumped behind the wheel of a “Cali Girl” Chevrolet SSR pickup.
Available in yellow or blue, the SSR comes with its own CD player. Since the CD player is actual size, you might want to remove it to use it. Otherwise, it looks like Barbie is transporting a giant monster truck tire in back.

Barbie 2004 Ferrari F1 car, Barbielistholland.com
This is a bit of a cheat, since it’s a limited-edition car available only at the 2004 International Barbie Doll Collections Convention in Chicago—and yes, we just broke our own rules since it wasn’t made by or for Mattel—but it’s the coolest and fastest car that ol’ Babs has ever laid her little plastic hands on. It’s custom built from a 1/6-scale remote control car, and the electronics have been removed. She can pretty much accomplish anything she sets her mind to. Ken, on the other hand...
http://cloud.member.hagerty.com/barbies-9-greatest-cars?utm_source=SFMC&utm_medium=email&utm_content=Agent+News+-+INDP
Blog Archive - Search Blog